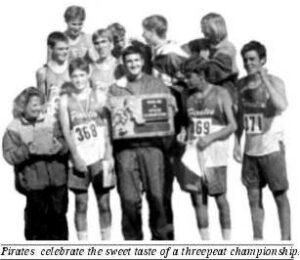 Pirates win third in a row

By John Siemers of the Salishian

A score of 66-69 at this year’s state cross country meet was the closest it has been for the Polson Pirates. The boys defeated the Browning Indians by three points.

“Everyone was wondering ‘did we do it?’” said coach Mindy Harwood.

“No one knew we had won until they announced that Browning had taken second,” said captain Jeremy Presnell, “because the top three teams all had three all-state runners.”

“The race is won in your 4-7 runners. Your front runners open the door and the fifth runner slams the door on the competition,” continued Harwood, “Jeff Orchard, Nathan Friesz, and Chris Stark really came through for us and clinched the title “What really won it this year was a lot of hard work, determination, loyalty, and heart and soul,” concluded Harwood.

Pirates continued their mastery of Class A by winning divisionals. They placed runners 2nd through 6th for a score of 20. Jeremy Presnell led the pack placing second to David Larimer from Libby.

The last race of the regular season took place in Hamilton. “Our boys haven’t lost this race for five years,” said Harwood. The team was led by Presnell and Ofstad who took third and fourth respectively.

“Our team should be strong next year. Dain is the second highest returner this year and we have a super class of sophomores,”said Harwood, “Right now we have Browning by one point, but we should be able to stretch that into more.