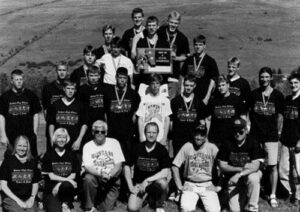 One for the 1990’s
Dixie Miller, Lake County Leader 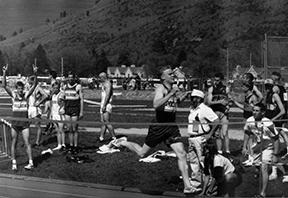 Polson – About half way through the Class A state track meet last weekend, Polson Pirate girls’ coach Bruce Thomas turned to boys’ coach Bob Gunderson and told him he thought the boys had the meet well in hand.

The boys had a certain look about them, Thomas told Gunderson. “We had too many good things happening,“ Thomas said. “They had their minds made up,” Gunderson replied, “They were too determined to let the championship slip away.”

The team accomplished last Saturday a goal Gunderson has had in the back of his mind since track season started this year – a state championship for the 1990’s. According to Gunderson, Polson High School has had at least one state championship track team in every decade since the 1950’s.

Track was the only state championship the school had until the 1993 basketball season, he said. This win rounds out a championship in every season this year. Last fall, it was X-Country and this winter the Pirate wrestling team wrapped up their second straight title. 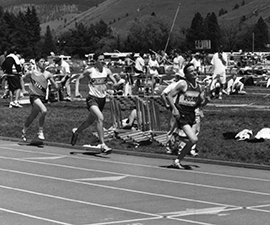 All in all, Polson’s boys won 7 championships. “We placed in 13 of 17 events, which is pretty good,” Gunderson said.

All eight seniors on the boys’ team advanced to the state tournament and six of those scored points. “They have goals and they go after them,” said Gunderson of the senior class. “It’s going to be hard to think of track without them.”

Almost everything Cameron Cole touched Saturday was gold. Cole is an individual champ in the 100M, 200M and 400M. He also anchored the winning 1600M relay team and was a member of the 2nd place 400M relay squad. 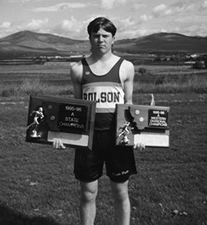 Other state champs are Kyle Wies in the 800M and 1600M and Kendall Lundeen in the javelin. Wies had to fight for the 1600M title – it was the closest Class A race of the day. He won by three one-thousandths of a second, but he won the 800M in 1:57.04 – three seconds faster than second place.

“Right now, he’s about where he was when he got hurt,” Gunderson said.
Kendall was probably the biggest surprise,” the coach said. Lundeen threw the javelin 178’ 8” for the win. “He says all the other guys just choked.” Gunderson asserts that one of Lundeen’s warmup throws intimidated the other competitors into choking.

“Ryan Johnson did a fantastic job,” Gunderson said. He placed fourth in the 3200M with a new school record of 9:58.12, which beats a record Johnson set last year of 10:03. “Great for him.” In the last two years, Johnson has been an important part of two state championship wrestling teams, a state champion x-country team, and a state champion track team. “That is pretty awesome for any kid. That’s pretty special.”

Another one who scored was Troy Gunlock, third in the high jump and fourth in the pole vault.

Kim Briggeman of the Missoulian 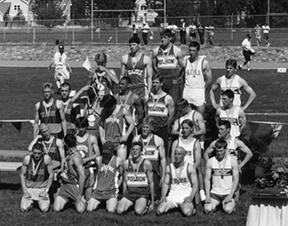 “I’m proud of the whole shebang,” said the 6-foot-2, 195-pound Cole, who won all three sprints and anchored the victorious 1600M relay team. “We got our state championship. Even people who didn’t quite make it through divisional… everybody deserves a little piece of this. It’s amazing.”

Polson claimed its first state track title since 1981, outscoring Glendive 107-80. Defending champion Colstrip, which edged the Pirates by one-half point in 1995, finished third this time with 57. 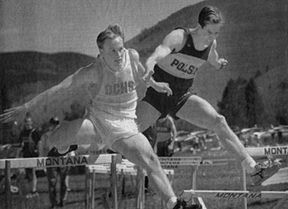 Polson’s boys stumbled early on the final day, losing the 400M relay in which they were favored. Then defending 300M hurdle champion Jace Harwood stumbled on the last hurdle, falling from first to sixth.

But Kyle Wies set things straight with a gutsy go-from-ahead, come-from-behind victory in the 1600M. Then Cole took over, driving past quick starters in the short sprints and overpowering the quarter-milers.

After all that running, Cole was still going strong on the last leg of the 1600M relay that dotted the exclamation point on Polson’s meet.

“I’m dead,” Cole said when it was all over. “I toyed with it an said it would be nice to sweep today, but then I looked at the East and thought, “Boy, those guys are tough. I’d be happy if I won the 400.”

Harwood’s fall seemed ominous at the time. The lanky Harwood glanced over to his right at the onrushing Tom Ziegler of Glendive as the approached the last barrier in the 300M hurdles. Harwood stumbled to the track, though he was able to salvage sixth place by scrambling the final yards to the finish line.
“I’ve had him since sixth grade and he’s never fallen in the hurdles. Never, ever,” Gunderson said. “He falls on the last hurdle of his last race in high school.” 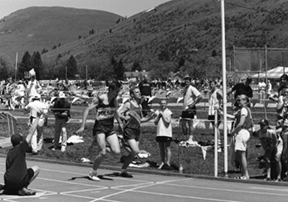 It was that vision Wies had on his mind in the 1600M. He charged out, probably too fast.

“I lost control of pace,” he admitted.

Mike Hensley of Colstrip stayed back for more than half the race, then moved to challenge Wies on the third lap. Hensley took the lead with 425 meters to go, but Wies wouldn’t fade. On the final stretch, he swung outside and drove to the tape. Both runners leaned. Wies won by .03 seconds.

“I was thinking about Jace the whole race,” Wies said. “I was heartbroken by (Harwood’s fall). I had to win it for him.”

It was the third state team championship for Polson High School this year, following last week’s boys’ golf title and the Class A wrestling championship in February.

“We’ve never had this kind of year in Polson,” Gunderson said. “I’m expecting a call from (President) Clinton at any time now asking for some gold. We could help out with the national debt.” 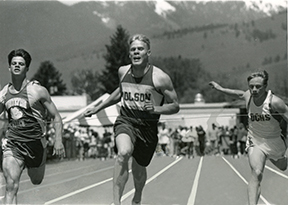 Junior Kyle Wies won the 800M and 1600M with a school record in the 800M. He also ran on the first place 1600M and 400M relay teams. Coming into the season Kyle had already won the state cross country title.