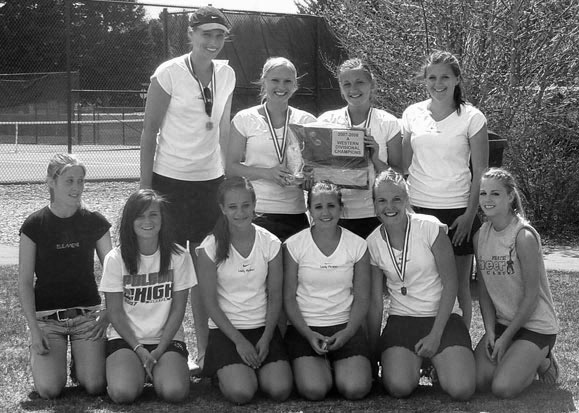 Pictured here are the Lady Pirate Tennis team with the divisional championship trophy. 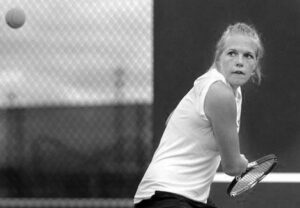 Photo by Garrett Cheen — Polson’s Cali Hislop prepares for a backhand return in the third set of the Class A state championship match with teammate Malika Erickson against fellow Lady Pirates Mattea York and Maddie Grebetz at the Flathead Community College last Saturday.

It came down to the two best doubles teams in Class A tennis … every day the Lady Pirates practiced this year.

The Polson High School girls’ tennis team flexed their doubles muscles, making the championship pairing an all-Polson grudge match and winning the team title along the way at the Class A state tournament.

Polson did not qualify a singles player for the tournament, but used three doubles teams to give coach Bob Hislop his first state title as the team’s skipper.

“I’ve been doing this for 17 years and to finally get a championship with my daughter on the team is really special to me,” Bob Hislop said. “These kids were so willing to listen to us coaches. They kept their eyes on the big prize and did what they did because they’re a special group.”

Divisional champions Cali Hislop and Malika Erickson again came away victorious in a familiar and always-close championship match against teammates Mattea York and Maddie Grebetz in the final. The two teams needed three sets to decide the champion, though, with Hislop and Erickson pulling away in the weekend’s closest match for either team, 6-4, 3-6, 6-2.

Bob Hislop said both teams were excited about the championship as the match started, but the competitiveness made things increasingly awkward for him as the match wore on.

“It was so competitive that I knew it was going to be so disappointing for the team that had to lose,” Bob Hislop said. “Mattea and Maddie were broken-hearted and Cali and Malika had a tough time enjoying it after beating their teammates. Having them play each other and winning the trophy made it easier for us coaches, though, ahead of time.”

Hislop and Erickson breezed through the first round and semifinals, but faced tough match in the quarterfinals against Livingston’s Mollie Morrow and Hanna Barney. The Polson pair eeked out a 7-5 first set, but lost the first three games of the second. They bounced back for six straight, though, eventually winning the set 6-3 to move on.

York and Grebetz also coasted through the first round and semifinals, facing their toughest opponents in the quarterfinals. The pair needed three sets to down Billings Central’s Katie Dahlin and Cathy Muskett, 4-6, 7-6 (7-3), 6-2.

“I’m sure they didn’t feel like they were contributors after losing out. Getting to state was a huge deal for them, though,” Bob Hislop said. “They battled in both their matches and came up barely short in the second. They did what we needed them to do and represented us really well. Kayla will be a great player for us for the next two years.”

Erickson, York, Grebetz and Ward will all graduate as seniors.

“These were really smart girls and top-end students who were mature kids. They were very athletic, too, of course,” Bob Hislop said. “They came to the cold practices with no excuses. A couple of them had work and one is a mother, but they didn’t give us problem one.”

The Lady Pirates were scheduled to win their title on the school’s home courts, but a rain-shortened schedule on Thursday moved the tournament’s remaining matches to the Flathead Valley Community College and Glacier Tennis Club in Kalispell.

MORE STORIES FROM THE MISSOULIAN

POLSON – The State A tennis tournament got off to a slow start Thursday.

KALISPELL – Western A teams made their marks Friday at the rain delayed State A tennis tournament.

Rain suspended Thursday’s first day of action, forcing the tournament to move from Polson to Flathead Valley Community College and the Glacier Tennis Club at The Summit in Kalispell.

After advancing two doubles teams to the finals, the Polson girls lead the team standings and the Whitefish boys placed their top singles player and doubles team into the championship to head the chase for the team trophy.

Hislop and Erickson scored a straight-sets victory over Havre’s Jolee Landgraf and Morgan McCann in the first round before downing Hamilton’s Kelsey Jura and Alyssa Smith 6-1, 6-3 in the quarterfinals. Hislop and Erickson then posted a 7-5, 6-3 win in the semifinals over Mollie Morrow and Hanna Barney from Livingston.

York and Grebetz ousted Havre’s Haley Donovan and Courtney Kinholt 6-1, 6-0 in the first round before taking a three-set victory over Cathy Muskett and Katie Dahlin in the quarters. The Pirate duo then downed Diamond Braine and Kylie Jimmerson of Lewistown 6-3, 6-1, to punch their ticket to the title match.

The girls’ singles final will be a rematch of last year’s title tilt as Livingston’s Anna Arrasmith hopes to defend her championship against Katie Mariani from Havre.

Led by divisional singles champion Renzo Caimi and doubles medalists Matt Harris and Brendan Viscomi, the Whitefish boys scored 20 points and lead second-place Corvallis by seven heading into the final day. Havre is third with 12 followed by Bigfork (6) and Lewistown (5).

Caimi, who hasn’t dropped a set this season, beat Mason Sheppard from Havre 6-0, 6-0 before advancing to the semis when opponent Angel Nikolov from Ronan was forced to default by injury. Caimi then moved into the title match with another 6-0, 6-0 win, this time over Justin Hartford from Lewistown.

After straight-set wins in the first and second rounds, Harris and Viscomi pulled out a 6-7 (4-7), 6-2, 6-2 semifinal victory over Isaac Boelman and Bryce Burke of Billings Central.

KALISPELL – Let there be no doubt, the West is the best.

Western A squads took home first-place team trophies Saturday from the State A tennis tournament after the Whitefish boys and Polson girls combined to win both doubles championships and the boys’ singles title.

Senior foreign exchange student Renzo Caimi completed his impressive season with a 6-1, 6-2 defeat for Geoff Fehr of Corvallis in the boys’ singles title match. The Chilean native Caimi went the entire campaign without losing a set.

The Bulldogs breezed to team honors by totaling 43 points, 20 better than second-place Corvallis. Havre was third with 19 followed by Lewistown (12) and Billings Central (9).

That was enough to give the Pirate girls 29 points and the team title. Livingston followed at 22, Billings Central and Havre tied for third with 19 and Whitefish rounded out the top five with eight.