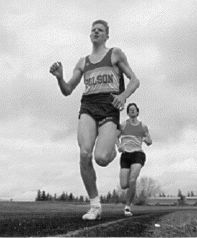 Whenever Kyle toed the starting line, people at far points of the stadium would stop what they were doing and watch, anticipating something special. He wasn’t hard to spot. At 6-foot-2, he towered over much of his competition, literally and figuratively.

“He is the one everyone is gunning for,” said Ackerly, who himself was one of the states premier prep runners. “But mentally, I think he is one of the toughest runners I have ever met. Kyle is always there at the end.”

Kyle, who also was a two time state cross-country champion attended the University of Montana in Missoula on a track scholarship.