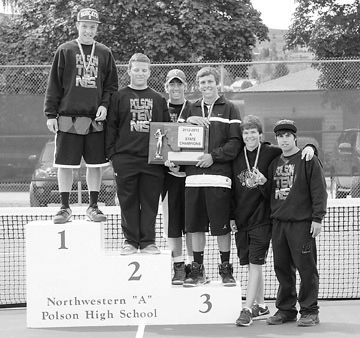 State Class A at Polson

Kings of the court

Photos and story by Bryce Gray of the Lake County Leader

POLSON – After 22 years at the helm of the Polson boys tennis program, head coach Bob Hislop can finally celebrate the program’s first state title, following his squad’s dramatic run before an energized home crowd outside of Linderman Elementary on Saturday. When Hayden Congdon and Layne Zimmerman shut the door in their third-place doubles match, the win catapulted Polson to the top of the podium along with co-champion Billings Central, capping an improbable sequence of high-stakes tennis.

The long-awaited Class A trophy is a crowning achievement for Hislop, and carries even greater personal significance since his son, Brady, was a key component of the Pirates’ championship run.

“This one was very special to me and my wife,” Hislop said. “Not only to win the first title in program history, but to also have a son on the team makes for a pretty amazing experience.”

Hislop’s team awoke Saturday morning knowing that Billings Central was in prime position to lay claim to the crown, and needed several things to break their way in in order to share the honor.

In singles competition, Dylan McCrumb and Brady Hislop did their parts to keep the Pirates’ hopes alive, securing second- and third-place finishes, respectively. 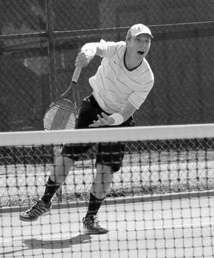 Despite a shaky start in the match for bronze, Hislop regained composure and rallied to beat Aidan Goodman of Livingston in straight sets, 6-3, 6-2.

McCrumb had the unenviable task of trying to avenge Hislop’s semifinal defeat to Billings Central ace, Dillon Meyer, but was vanquished 6-2, 6-0. Only a sophomore, Meyer has now won two state singles titles in his young varsity career.

“Dylan had a pretty tough go in the championship match,” said Coach Hislop, tipping his hat to Meyer. “Brady had a bit of a nervous start ‘cause he knew [he had to win]. He really rolled after the first couple games.”

But Polson’s fate wouldn’t be determined until the very end of the tournament. The Pirates not only needed Congdon and Zimmerman to capture third, but were also relying on help from Glendive in the fifth-sixth doubles matchup. 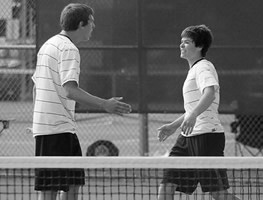 When Glendive came through by topping Billings Central in that match, it set the stage for Congdon and Zimmerman to play the part of heroes.

“When Glendive won, one of their players came over to Hayden [Congdon] and said, ‘You’re welcome,’” Hislop said.

Commanding the full attention of an intense crowd, the Pirate duo held on in a white-knuckle second set to defeat Logan Blades and Sean Janni of Whitefish, 6-1, 7-6 (3), putting an emphatic period on the most triumphant chapter of the program’s history.

“When the second set got tight they really came through,” Hislop said of the title-clinching doubles team.

“Layne is just a sophomore – he just had a fantastic state tournament. And Hayden wanted it so bad. He kept asking me throughout the year, ‘How are we lookin’?’”

Although the quartet of McCrumb, Hislop, Congdon and Zimmerman made it onto the podium as individuals, the championship was truly the product of a collective team effort.

“Sam [Kinzle] and Tyler [Dupuis] only won one match, but the one match was worth one point and that was the difference,” said Hislop.

“It takes a team, and these guys have been one all year long.… It just came together for them.”

And, as the team found out, a dash of luck doesn’t hurt either.

“Combination of an amazing last day of the tournament, and a little bit of luck,” Hislop said of the team’s winning recipe. “As a coach it was tough knowing we couldn’t do it ourselves and we had to have help.”

Now with a championship under his belt, Hislop believes that the win is a promising sign of things to come for the program and is casting a hopeful eye to the future.

“Three of the four [players] that placed will be back. They’ll lead by example.”

Billings Central served notice its a force to be reckoned with by qualifying three for Friday’s semifinals in Polson. The list includes defending state champ Dillon Meyer (25-0) in singles and the doubles duo of John Knisely and Harrison Fagg.

The Rams’ No. 2 doubles team of Tommy Pankrantz and Jake Newbury is still alive on the consolation side. Their evening match was called after two sets because of darkness.

“I feel like we’re in good position,” coach Mary K. Housinger said of the Rams’ team title hopes. “But Polson still has a lot of their kids in and Corvallis still has several in so there’s no guarantees of anything yet.”

Polson had two boys reach the semifinals in singles in Brady Hislop and Dylan McCrumb. Hislop will face Meyer and McCrumb will battle Aidan Goodman of Livingston.

The Blue Devils’ defending state champion doubles team of Bridger Walczynski and DJ Pekoc survived some indigestion in reaching the semifinal round.

“Their first match they came out and pretty much took care of business easily,” Corvallis coach Chris Maul-Smith said. “The second match Bridger got sick, kind of a lunch malfunction, so he had kind of a rough start. They were never down I don’t think, but they gave up three games in the first set.”

Walczynski and Pekoc have yet to lose this season, but they’ll be put to the test in a semifinal against Whitefish’s Logan Blades and Sean Janni. The Bulldog duo reached the semifinals with a 6-4, 7-6 (3) win over Blake Stanhope and Gavin McPherson of Glendive.

Also reaching the semifinals in doubles was the Polson team of Layne Zimmerman and Hayden Congdon. They will face Knisely and Fagg.

The state meet will wrap up Friday either in the late afternoon or early evening, depending on the weather. The forecast calls for a 70 percent chance of rain.

Corvallis doubles dynamo on brink of State A tennis sweep

POLSON – Anyone who has ever played high school doubles knows the endeavor is decidedly unpredictable.

That’s what makes Bridger Walczynski’s accomplishments so impressive. The Corvallis senior moved to the brink of his fourth straight State A doubles championship Friday, teaming with DJ Pekoc to reach Saturday’s final with a 6-0, 6-0 win over Logan Blades and Sean Janni of Whitefish.

The state meet was slated to finish Friday but a pair of storms caused a four-hour delay. Consequently, the finals and place matches will be played starting at 8 a.m. Saturday.

Walczynski, who has competed with three different partners in four years, will shoot for a rare high school sweep against Billings Central’s John Knisely and Harrison Fagg. He and Pekoc enter the match with an edge in experience, having teamed for a state title last season.

Walczynski made no bones about the significance, at least in his mind, of winning his fourth straight title.

“It would be the greatest thing I think could ever happen to me in high school,” he said.

“It’s just an amazing pair to watch,” he said. “A ball goes past one of them and you think it’s a done deal and they cross and cover for each other. It’s fun to watch.”

Polson’s doubles team of Layne Zimmerman and Hayden Congdon didn’t fare as well in their semifinal. They fell victim to Knisely and Fagg in a heartbreaker, 6-1, 7-6 (1).

The Pirates, who are tied with Billings Central atop the boys’ team standings with 17 points apiece, did have winner in the semifinal round. Dylan McCrumb defeated Livingston’s Aidan Goodman, 6-3, 6-4, to earn a spot in the final where he will face defending champion Dillon Meyer of the Rams, who swept Polson’s Brady Hislop, 6-1, 6-0.

POLSON – It was a special Saturday for a pair of western Montana teams at the State A tennis meet. 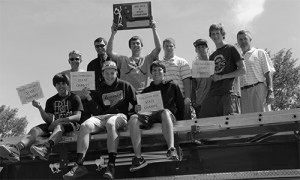 For the first time in history the Corvallis girls and Polson boys were crowned team champions. The Blue Devils edged out Glendive by three points while the Pirates shared top honors with Billings Central.

“We knew last night Billings Central had probably won (a title share) and we had to have Brady win and the doubles team win and we had to have some help from Glendive,” Pirates coach Bob Hislop said. “All of that had to happen today and after our doubles won and Glendive won it was a pretty rowdy environment for a high school tennis tournament. The crowd was pretty darn into it.”

For the Polson boys, Brady Hislop wasn’t the only one to capture a key third-place finish. The doubles team of Hayden Congdon and Layne Zimmerman matched the feat with a win over Whitefish’s Logan Blades and Sean Janni, 6-1, 7-6 (3).

“The kids just came through,” coach Hislop commented. “Shared or not, winning the team title is very sweet.”

With morning temperatures in the low 40s, the Pirates’ Dylan McCrumb didn’t fare as well in the singles championship. He ran into a buzzsaw in sophomore Dillon Meyer of Billings Central, who secured his second straight championship with a 6-2, 6-0 victory.

“The Central boys came out and were definitely a worthy opponent,” Blue Devils coach Chris Maul-Smith said. “That first set they played quite well. They were never leading but it was close.

“Late in that first set Bridger and DJ were getting dialed in. After that they took charge. As soon as they finished I think Bridger jumped up and yelled, ‘Yeah!’ Very fittingly he was the one that put away an overhead to finish it out.”