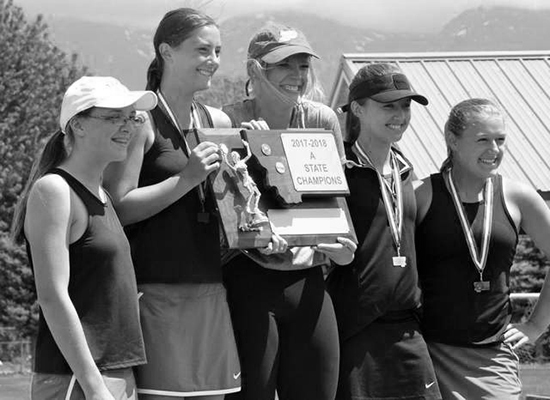 Northwestern A Players off to a good start

POLSON/RONAN — Northwestern A divisional champions had a good showing during first-day play at the Class A state tennis tournament on Thursday.

Singles champs Shea McGuinness of Polson and Brendan Buls of Whitefish were undefeated, along with Polson’s Kyler Lundeen and Berkley Ellis in doubles.

McGuinness had just one match as rain shortened the event. She rolled in the first round 6-1, 6-1 and will face Nicole Hritsco of Dillon in the quarterfinals today.

Lundeen and Ellis looked sharp in their opener, cruising 6-0, 6-0. They will face Brooke Gilbertson and Lily Reddick of Belgrade in today’s quarterfinals.

Girls played at Ronan on Thursday with the boys at Polson.

No team scores were available for the boys, but on the girls side, Lewistown, Hamilton and Ronan were all tied for first with 14 points each.

All the action today will be in Polson.

POLSON — In the girls singles final, Shea McGuinness of Polson will face off with Olivia Fehr of Corvallis. McGuinness beat Nicole Hritsco of Dillon in Friday’s quarterfinals 6-4, 6-4 and dropped Reagan Smith of Livingston in the semifinals 6-4, 6-3.

Libby’s Isabella Martineau has a loser-out match today with Sharmayne Hardy of Hardin.

In girls doubles, Kyler Lundeen and Berkely Ellis of Polson have a loser-out match with Katherin Kamp and Bobbi Lima of Livingson and Aubrey Hanks and Olivia Potthoff of Whitefish will play Erin Bartlett and Jackie Westman of Stevensville. Those winners move on to the third place match.

Brooke Gilbertson and Lily Reddick of Belgrade face Makiko Reisig and Kate Murdock of Hardin in the doubles final.

Team scores: Will be posted after today’s matches.

POLSON — A “maybe” became a reality for Polson coach Bob Hislop while the wish by Whitefish coach Chris Schwaderer for his players to show that “they deserved to be there” also came true at the Class A state tennis tournament over the weekend.

Polson’s girls and Whitefish’s boys were both crowned team champions of the three-day event. It was a fitting end on Saturday to a spectacular season for both programs, who earlier this month won Northwest A divisional boys and girls titles.

The Polson girls were 17-2 in duals this season with losses to Corvallis and Libby; and the Whitefish boys 14-1 with the lone setback to Hamilton. 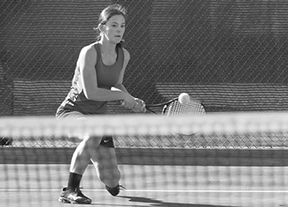 Polson, riding the efforts of state singles champion Shea McGuinness and fourth-place doubles finishers Kyler Lundeen and Berkely Ellis, rolled up a 24-point total to finish seven ahead of Belgrade and Hardin, who tied for second.

McGuinness defeated Olivia Fehr of Corvallis 6-4, 6-3 in the finals on Saturday. She was 4-0 at state and won all her matches in two sets. The junior finished the season with an 18-0 record.

Lundeen and Ellis pulled through with a 7-6 (7-4), 6-0 consolation win over Katherine Kamp and Bobbi Lima of Livingston, but came up short in the third-place match, losing to Whitefish’s Aubrey Hanks and Olivia Potthoff 6-4, 6-3.

“We knew we would get a share of the title if they won their (first) morning match,” Hislop said of his doubles team.

“I knew there was a good chance with three girls we could score,” Hislop said. “We needed a perfect weekend and we had it.

It was the first state title for the Polson girls since 2013. Polson also hosted state that year. The Pirates have captured three state championships in the last 10 years.

By Jason Blasco of the Leader

Polson High School tennis coach Bob Hislop has been in the business of tennis long enough to know it isn’t easy to win a state team championship or a state singles championship as he and his team headed into the Montana High School Association Class A State tennis tournament May 24-26 in Ronan and Polson.

Hislop, who has been the Pirates’, Lady Pirates’ tennis coach since 1992 and has won three girls state titles, one boy state title and 19 combined divisional titles, still never had one thing on the Pirates’ illustrious tennis resume entering this year’s competition: a state singles champion.

In Hislop’s 26 years of coaching tennis, he knows how rare state titles are.

McGuinness maintained her undefeated record all season long and still had to overcome adversity, including a wrist injury that affected her in the later portion of the season and even headed into the postseason.

“Shea has been hurt the last three and half weeks of the season with a wrist injury,” Hislop said.

In most cases, an injury such as a wrist injury can inhibit what a player is capable of doing, especially in a sport like tennis where a player is co-dependent on their wrists as a key component to generating power.

Shea showcased her mental toughness by playing through the pain and seeking the advice of her coaches and her mother, who is a physical therapist.

“She just tapped it up and went on with it,” Hislop said. “(How she dealt with that adversity) was pretty cool.”

Hislop credited her mother’s background for helping make the injury manageable for Shea.

“Her mom is a physical therapist and that really helped out a lot,” Hislop said. “Her tape jobs were able to support it and other factors (helped her recover) like when the weather became nicer. That helped her speed up her recovery when it became warmer out and the tennis rackets weren’t so stiff.”

Last year, Cassie Carlyle made it to the championship game but was unable to defeat Glendive’s Ceeara Staiger in the finals. Hislop said he suspected Carlyle qualifying for the finals might have provided motivation for McGuinness, according to Hislop.

“(Our coaching staff) did our work but Shea did most of the work and for the most part, we are pretty darn proud of her,” Hislop said. “I”ve been at state many times and almost won. I know how special it is when you win one because (state champions) don’t just fall off trees for you.”

The performance of Shea McGuinness wasn’t the only highlight at the Montana High School Activities Association but she was one of the key components to helping her team capture the Class A state championship team title.

This marks Hislop’s third state title as the coach of the Lady Pirates and he has been able to achieve four state titles with homegrown talent from Polson.

“My proudest portion of building this tennis program is that in all of our state championship teams, we haven’t had one single high school transfer or someone that came from another school knowing how to play tennis,” Hislop said. “We have built tennis players right here in Polson. The kids have gone to the Summit in Kalispell for lessons, but we never had a perfect player just drop out of the sky (into our program).”

Hislop said he also has to compete for athletes with other spring sports in Polson, such as track and softball.

“It is pretty unusual to have three sports in the spring that are successful,” Hislop said. “We are competing for the best athletes (in other sports) and we needed all of our kids to make us as good as we could be.”

Hislop said he felt he knew his team had the ability to capture a state title, but also knew that anything can happen when you qualify for the state finals.

“You hope more than you expect (going into state),” Hislop said. “I knew we had the chance to do it, but I also knew a lot of things had to fall into place.”

When the girls captured a divisional title, they also got some extra help that allowed them to score additional points when senior Josie Peterson qualified for state.

The Lady Pirates accumulated a total of 24 team points and the closest competition comparatively were Hardin and Belgrade. Both teams finished with 17 points.

Aside from McGuinness’s contribution, the Lady Pirates received help from the doubles tandem senior Kyler Lundeen and freshman Berkley Ellis.

“Without Kyler’s leadership, we wouldn’t be where we are at,” Hislop said.

“To be able to do what she did as a freshman is a testament to her character,” Hislop said. “It will be fun to have her for another three years. I felt like she rose up in the big moments rather than shrinking like a lot of kids would do.”