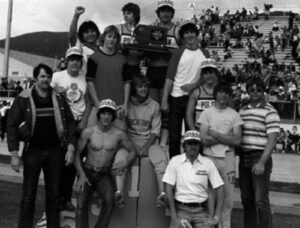 Butte – A dirty T-shirt did it. Well, maybe Mike Geer, Mike Ogden and Dave Forman had SOMETHING to do with it.

But the dirty T-shirt Polson coach Bob Gunderson held in his hands all afternoon Saturday has to get some credit for the Pirates brand new Class A state track championship.

The Pirates, getting a gutsy stretch run from Ogden in the 1600 meter relay at the end of the meet, edged Whitefish 44-43 for the title. Polson and Whitefish, incidentally, finished fourth and third, respectively, in the Western A divisional last week.

Polson’s win, in Gunderson’s mind, made up for the title they barely lost two years ago. In that meet, Geer lost the high jump competition when he cleared the same height as the winner but had a miss at a lower height.

That, says Gunderson, dropped the Pirates all the way to fourth.

Gunderson kept an Interscholastic track T-shirt from that year and he wore it during Friday’s competition for good luck. It was dirty Saturday, he said, “but I brought it along anyway.”

“We maxed,” Gunderson said, “We got as many points as we possibly could have.”

Polson went into that final race 5 points behind Whitefish, which led in the team standings almost the entire meet. The Bulldogs didn’t qualify a relay team, thus having to sit and hope. A second-place or lower finish in the relay by the Pirates would give them the state championship.

At divisionals, Dillon outlasted the Pirates to capture the relay. Geer’s strong opening leg gave Polson a long lead over sixth-place Dillon, but the Beavers’ Jade Stokke put on a tremendous kick on the second lap to pull Dillon back into contention.

Walt Staves’ second leg left the Pirates in second, but Art Caye regained the lead by about 3 meters over Dillon on the third circuit.

Then it was all up to Ogden, who was outkicked by the Beaver’s Dale Carpenter in the divisional meet. This time, however, Ogden held off Carpenter’s surge to cinch the title (3:26.71).

Ogden had made an all-important conquest of Carpenter and Stokke earlier in the day in the 400m (50.75) to finish second behind Stevensville’s Ted Ray. Both Dillon runners beat him in that race in the divisionals.

Then there was Forman. Last week at the same track, he flung the discus only 140-03 for fourth place after throwing it into the protective screen a couple of times.

“The screen psyched him out,” Gunderson said.

This week, Gunderson talked Polson Principal Dennis Jones into letting the team to down the day before the meet, mainly to let Forman get used to the screen.

“He (Gunderson) said he wouldn’t even ask, but two or three points might make the difference,” reported Jones.

Forman responded with three throws over his previous personal best, including the winning toss of 154-10.

Geer won the 110 high hurdles by scant inches over Whitefish’s feisty Warren Tarr. Had the outcome been reversed in that race, it would have reversed the final meet outcome. “He (Tarr) blew me away at the start,” Geer said after the race, “I just had to fight back. That’s the way he usually does it, but he usually dies at the end.” Geer was timed at 14.96 and Tarr’s clocking was 14.97.